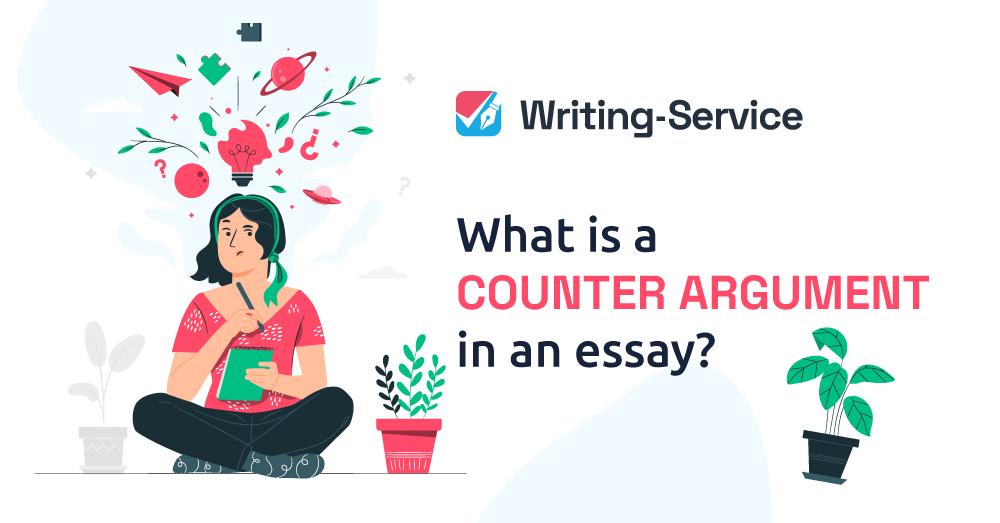 What Is a Counter Argument in an Essay?

By writing a counter argument, students make their essays more impressive and stronger. It allows them to build a logical justification of personal argument with a higher level of supportive evidence. A strong counter argument helps writing an academic paper with a substantial amount of examples and critical statements, and it makes an essay stronger.

What Is a Counter Argument in an Essay? Essential Information

How to Write a Counter Argument

Where to Write a Counter Argument

Mind that you should do not write too much about the counter argument not to make it a focus of your paper. A counter argument is just an assisting point that helps you justify your thesis statement.

How to Start Writing a Counter Argument

Even though a counter argument is a part of an essay, you need to incorporate it in such a way that it does not sound like a center of discussion. Use transition words to make a counter argument a part of your writing. You need to resort to transitional words or phrases to make the change of ideas slight and reasonable. Remember to make your discussion logical. This is the only way of making your essay strong.

There are many transition words you may use for your counter argument. Writing opposing points of your argument may require specific transition words. Check the list below and use the words that may be interesting for you, and comply with your writing. Here are some of the transitional phrases:

Although this may be true

On the other hand

There is a good strategy to resort to question worlds as a part of your transition:

Check a Counter Argument Example Developed by Our Professional Writers

In the paper I wrote “Genetic Engineering-Salvation or Damnation?” I argued that genetic engineering in the field of agriculture is a dangerous endeavor given the weak regulations that guide the field. In this light, I explored potential dangers of genetic engineering as it is carried out presently and pointed at clear examples of the adverse effects posed by practice that hinder its initial objective of solving food crisis around the globe. Genetic engineering interferes with indigenous species, and there is little research carried out to establish its long-term effect on the environment and the social welfare of communities. In addition, it is under-regulated and seeks to give the power of food security to a few corporations who patent their products.

However, there are some weak points in the argument above as it purports that genetically modified foods brought a new era of bio-colonialism that endangers indigenous crops. The paper presents genetic engineering as a potential threat to current and future survival of indigenous species. While there is evidence of interference from such crops, a lot of research and lab tests are carried out to ascertain their safety. The paper also fails to recognize the crucial role played by genetically modified foods in curbing global food insecurity.

The logic that my argument rests on is as follows: Genetic engineering is damnation. However, someone might object to the logic of this unstated assumption due to evidence that genetically modified foods make significant contributions to food security, as they can thrive in conditions that indigenous food would fail. Such foods are drought and pest resistant making them suitable for all-year production thus averting hunger crisis. In addition, genetic engineering allows modification of indigenous crops, making them tolerable to pests and harsh weather conditions.

I can identify strong arguments that someone might make responding differently to my question on the issue of genetic engineering. Genetically modified food is unhealthy for human consumption and further has more non-health based negative effects. Consumption of such food involves consuming the modifying genes in the product and the gene remains in the body of the consumer, leading to unpredictable chronic diseases and harm to unborn babies. There is a deficiency in research on the long-term effects of GMOs. The plants affect the environment, social welfare and have economic costs. The plants and their herbicides degrade the environment, affect biodiversity, and pollute water, which in turn affect communities and bears economic costs.

The future of food security lies in the genetic engineering. Despite the huge population and massive population growth trends around the world, only 10% of the earth is arable to feed that population. As such, alternative means of food production to ensure food security are necessary to avert a crisis. Genetic engineering offers a perfect solution to the problem since the plants are pest and drought resistant.

In addition, genetic engineering allows the transfer of desirable genes to various plants, thus increasing their production capabilities. Indigenous crops are the most prominent beneficiaries of genetic engineering since they can be improved to enhance their productivity and increase their resistance to perennial problems of pests and drought. The seeds are also relatively cheap and hence affordable to farmers.

There are weaknesses in this argument as well. Genetically engineered plants interfere with local species, as was the case in Minnesota where genetic rice cross-pollinated with local rice causing sterility, thus affecting production rates. In addition, such foods tend to deprive farmers of the benefits of their traditional foods due to their replacement thereby endangering their existence. In other situations, companies seek intellectual property rights for their products, which ensures that they continue to increase their products, thus further commercializing food security.